Recently I have received a request to check data recovery possibilities from a damaged Sony Xperia Z5 Premium smartphone. The phone was dropped and it stopped working. No screen, no charging, no communication on any interfaces, no sign of life, it was nothing more than a brick. Well, a brick, with tons of useful data on it without any cloud synchronisation or offline backup. Needless to say how important was for the owner to get his priceless information back from the device.

Some damage identification and recovery probes were already conducted by other professional parties, even a new screen was ordered and tried, but none of the activities provided any promising result. After the failed attempts the owner almost gave up the hope, but fortunately, we had a common acquaintance and this is how I came to the picture.  Due to the previous investigations the phone arrived to me partially dismantled, without a battery and with some metal shields already removed.  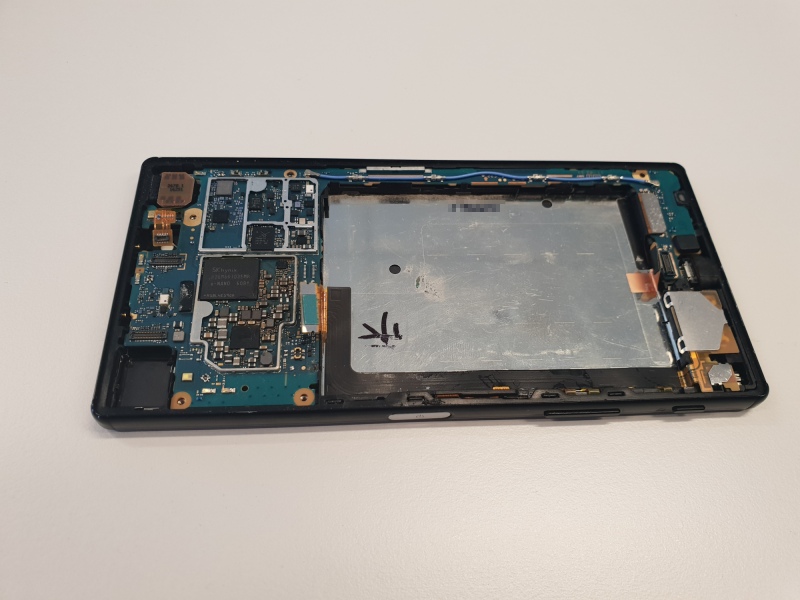 As the very first step, I tried to find the data storage. It was quite obvious to identify the memory chip on the PCB, which was a SK hynix H26M64103EMR. This is a simple, 32GB eMMC in a common FBGA package. I had a couple of eMMC related projects in the past, where I had to deal with chip interfacing and direct memory dumping or manipulation. This is often a task in hardware hacking projects I am involved in, for example to gain full access to the OS file system in case of a car head unit or other embedded systems, just to mention another example. 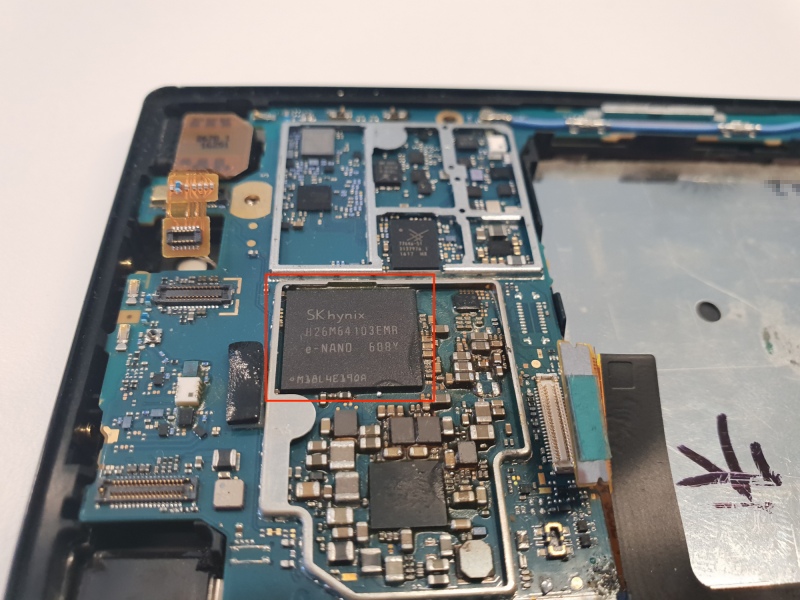 This was the first promising moment to get the owner’s data back.  As all of the non-invasive activities failed, I decided to go after the so called “chip-off analysis” technique. This means that the given memory chip has to be removed from the PCB and with the chosen interfacing method its content should be read out directly for further processing.

An important point for this method is that the used encryption settings could be the key  for the success, or for the failure. An enabled or enforced encryption could prevent a successful data recovery, even if the memory chip is not dead and its content could be dumped out. If encryption is in place, the decryption also has to be solved somehow, which is nowadays, with more and more careful design and with properly chosen hardware components, is very challenging or could be (nearly) impossible. Fortunately, at least from data recovery perspective, the owner did not turn on the encryption, so circumstances were given to the next step.

After the PCB was removed from the body, I fixed the board to a metal working surface with kapton tape. Then a little flux was injected around the chip for better heat dispersion and I used a hot air station to reflow the BGA balls and to let me pull of the chip from the PCB. 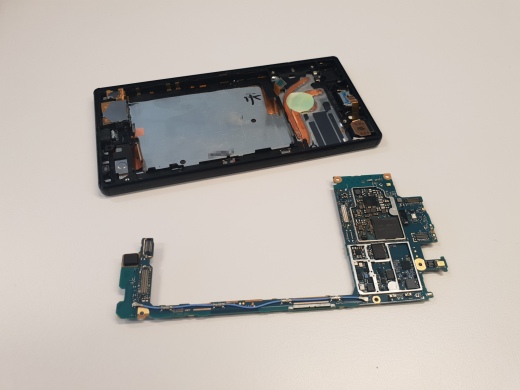 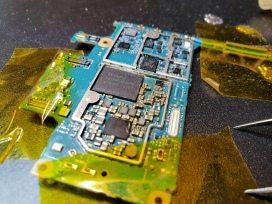 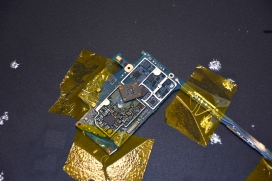 There are multiple ways to communicate with the eMMC chips. Most of them take advantage of the fact, that these chips are basically MMC (MultiMediaCard) standard memories, but in an embedded (this from where the “e” comes from) format. This means, that as soon as the connection to the necessary chip pins are solved, a simple USB card reader could do the job to read and write the memory. These chips usually support multiple communication modes, using e.g. 8 bit or 4 bit parallel interface or a single 1 bit interface. For an easy setup and without special tools usually the 1 bit mode is used. The only criteria for this method is that the reader also has to support 1 bit mode (Transcend USB card readers seems to be good candidates for this job). In such case only CMD, CLK, DAT0, VCC (VCC, VCCQ) and GND (VSS, VSSQ) pins have to be connected. Do not be afraid of the lot of pins, in fact, only a couple of ones are used. The pinout is generic and based on JEDEC standard, so regardless of the vendor or the chip you are dealing with, it is almost sure that you will find the important pins at well known location, as it is showed in the picture below. 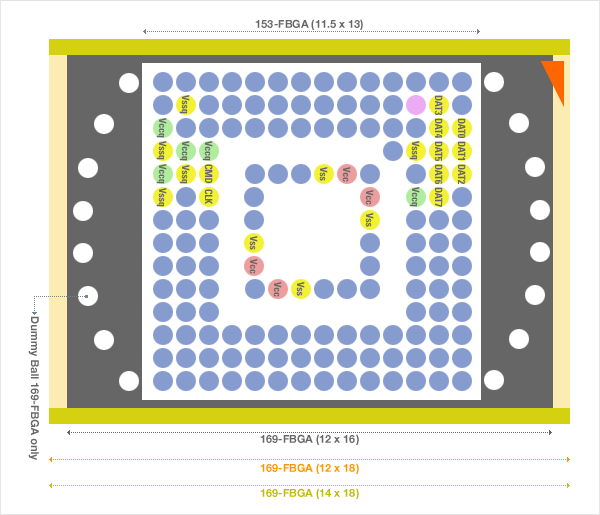 I made these connections in the past by manually soldering 0.1mm insulated copper wires to the given BGA balls then wire them directly to the reader. If you have stable hand and good enough soldering skills then it is absolutely not impossible. There are cases when you have to deal with logic level shifting and multiple voltages (different voltage for memory and Flash I/O /this is the VCC/ and for the memory controller core and MMC I/O /which is the VCCQ/), so always be careful and read the datasheet or measure the given voltage levels first. This time, I had a better toolset available, so I used a SD-EMMC plus adapter connected to an E-Mate Pro eMMC Tool. Using this combination it was possible to simply put the removed eMMC chip to the BGA socket without any custom wiring and to communicate with it with a simple USB card reader. 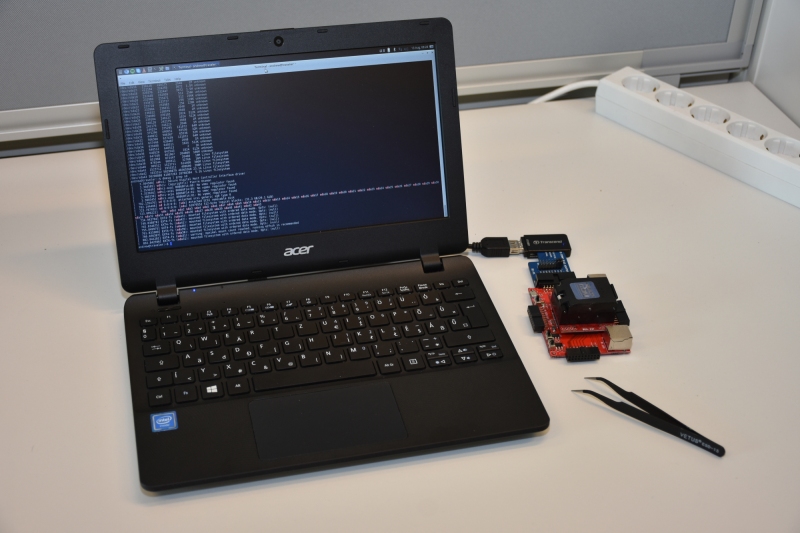 As I attached the tool to my linux machine it recognised the device as an USB mass storage and it was ready to use.

The device was mapped to “sda” device. As you can see from the “dmesg” extract above, there were a lot of partitions (sda1 – sda43) on the filesystem. Before moving forward, as always in a case like this, the first step was to create a dump from the memory chip, then conduct the next steps on an offline backup. The “dd” tool could be used for this purpose:

With the full dump it was safe to continue the analysis. Using “parted” I checked the partition structure:

Only one partition, the “userdata” was relevant for the recovery. Using “losetup” it is possible to automatically mount every recognised partition from the image, or only the chosen one by specifying e.g. the proper partition offset in the image.

As soon as the filesystem was mounted the recovery was not a big deal anymore. It is public knowledge where and how Android and common applications store stuffs such as contacts, text messages or pictures. For other applications it is also quite easy to reveal the details by crawling their application folders and by checking their database files.

Based on the owner’s request I focused only on some data:

With a rooted spare device it could be possible e.g. to replace the database files on the new device to the recovered ones to let the phone parse and show the data for further processing, however standard users will not be able to do this. For me, it was easier to go after the direct recovery, instead of playing with another phone. Picture and multimedia files do not need special care as those just had to be saved without any post processing, but in case of other data stored in SQLite databases the extract should take care about the given database structure and the generated output should be something which could be read by humans or could be processed by other tools.

I found a “dump-contacts2db” script on GitHub which was good to parse the contact database and export the items to a common vCard format. This is something which a user can later import to several applications and sync back to the new phone.

For the text messages I did not find anything useful, so I quickly checked the corresponding data structure in the SQLite database:

It was not too complex, so in 2 minutes I made a quick and dirty but working script to extract the text threads to CSV files:

All done, this was the last step to recover every requested file and info from the phone. I did not spend too much time on the recovery itself and the whole process was also fun for me, especially by knowing the fact that others have failed before me. 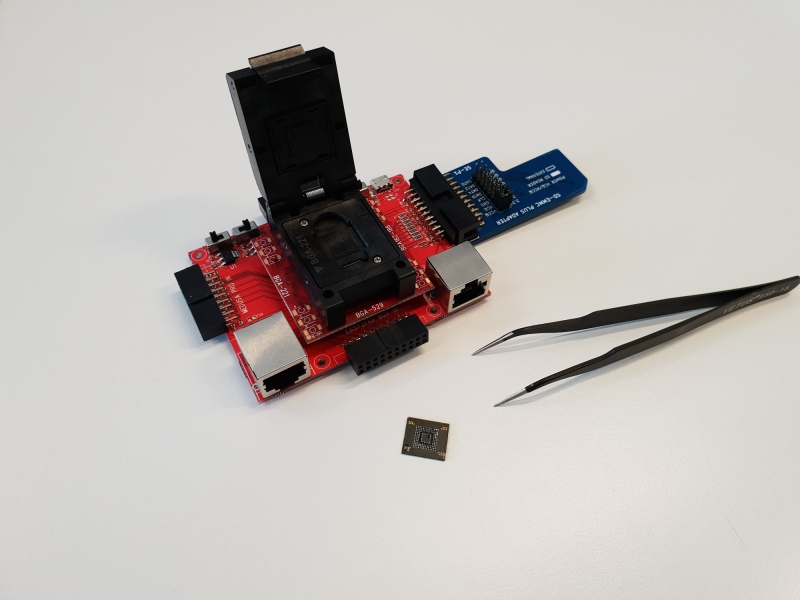