When we moved to our new home we tried to find modern LED lamps for the ceiling lights but it was not an easy task. The requirements were simple:

LED lamps available on the market were good for decoration illumination only, almost none of their brightness level reached the level of a traditional 100W incandescent lightning (1600 lumen). We found some powerful ones, but their light was direct to one direction and not diffused, so their main application could be great e.g. for dining table lightning but not for a whole room illumination.

It took couple of months, a plenty of visits in different shops and a lot of wasted time by browsing several web stores before we really realized, that no lamp will match to our needs and we have to find another solution. So, we changed the approach and tried to find standard ceiling lamps, which could be subject of a customization and upgrade.

During our journey in Krakow we found a nice one (Nowodvorski Tokyo) in the local OBI market, made by Nowodvorski, a Polish company. This lamp is designed to handle two T8/G13 fluorescent tubes. The package did not contain the tubes but the lamp only. We loved the wood frame, the sandblasted glass, the overall design and it seemed to be a good candidate for further modifications, so we made our decision and bought it.

Later at home I started the upgrade process with dismantling:

The unnecessary sockets, cables and electronics were removed, an aluminium L profile (40 x 10 x 2 mm bought from Bauhaus) was cut to the fluorescent tube’s location and fixed to the main metal frame with screws. I used L profile because due to its stiffness it does not allow the profile to sag between the two mount points. 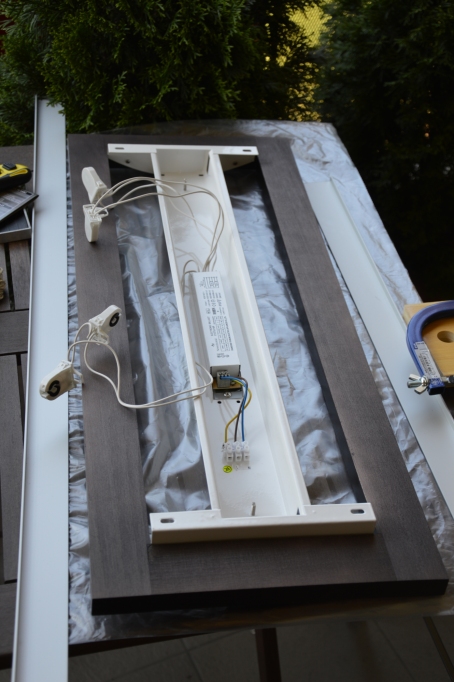 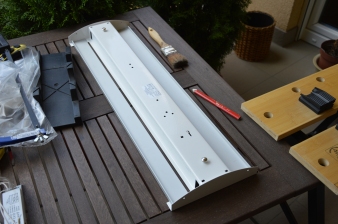 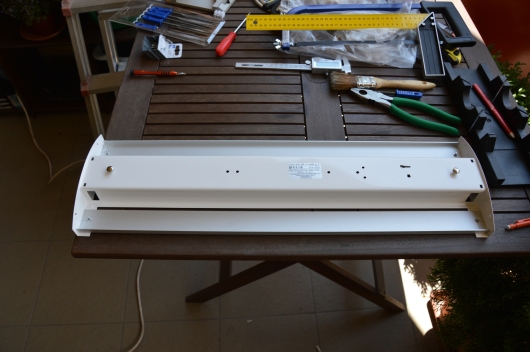 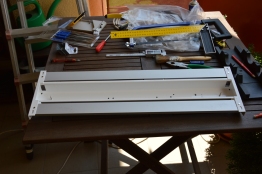 I planned to use LED strips, as it is easy to work with them and they do not require additional connectors or sockets . Aluminium profiles are great for mounting adhesive LED strips and to solve the heat dissipation as well. The illumination was planned for two directions, one to the ceiling and one to the floor. For the ceiling direction another 45 degree angle aluminium LED profile was used to keep the LEDs.

After checking the available LED strip options and taking their technical details (such as provided lumens, power consumption) into consideration, I decided to use the 2835-60 strips. These contain 60 pieces of 2835 COB (Chip on Board) SMD LEDs in one meter. The strip could provide 1350 lumen by 15W power consumption per meter. It also comes with pre-installed 3M adhesive tape. After cleaning the aluminium surfaces from dust and grease the LED strips were mounted to the profiles. 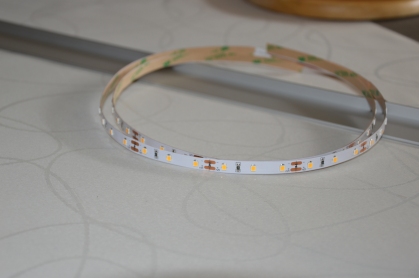 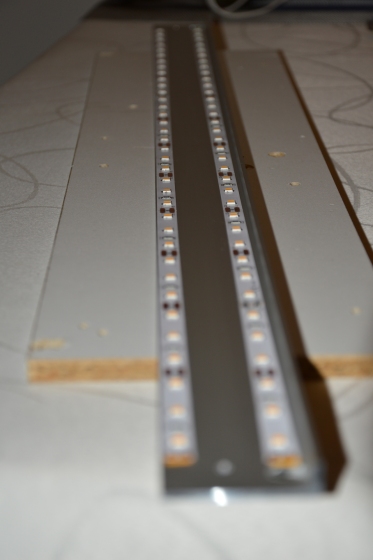 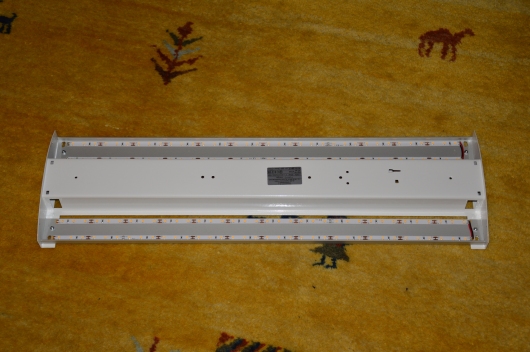 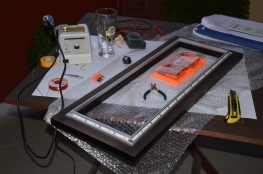 I separated the serial connected LEDs for two circuits, one for the top and one for the bottom illumination. As we have two switched live wires for each lamps, this way it could be possible to turn on/off the top and bottom lightning independently. Of course, this means that two 12V power supplies should be installed into the lamp’s body. Otherwise, one bigger power supply could drive both circuits at once, but with this way every LED is switched together. 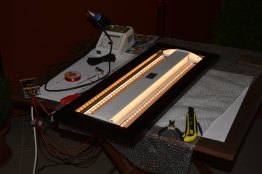 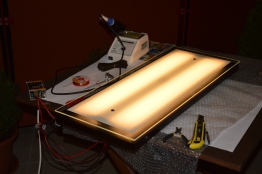 I had two spare 12V/60W power supplies, so by using them it was possible to switch the top and bottom lights independently.

On the other hand, 12V/100W power supplies  were ordered from China, 11.6 USD each, with free shipping. Incredible. These power supplies were planned to use for other lamps. I also tested them and they worked without any issue.

The final lamp has the following technical details:

The result was even better than we expected, so additional 2 lamps were upgraded in the same way and installed in different rooms. One and half year passed, without any issue. Each of the lamps work perfectly, although in the current setup dimming is not possible.

Of course, I have a plan to handle the dimming and the “smart switching” 🙂 The upgrade will address both the independent dimming and switching by using one power supply only. Moreover, the given solution is in a prototype phase now, but this will be subject of another post later.

Finally, the used materials summarized below: